The cooperation of British video artist and film director Isaac Julien and the
ChoP duo (Zen Lu and Grzegorz Bojanek) is one step further.

During the forthcoming 8th Shanghai Biennale in the Shanghai Art Museum ChoP will perform their live-act to the latest production by Isaac Julien. The film will be stripped of the original score and only the special effects and poems used in the film remained. ChoP will create the whole new music improvising while watching the Isaac’s film.

This performance will take place on the 22 October 2010 during the Biennale VIP opening. The music will be recorded and the visitors will be able to listen to it in the exhibition of the Isaac’s photos.

Get some ChoP tracks

Here you can BUY our first album, called:

You can buy the whole album. It costs only 5 EURO.
Or buy separate tracks for small prices.
Each track contains a separate photo made by Cezary Stolecki.
Album cover was designed by Hei Lee.

When you download and import the album into iTunes or anywhere else, you come with the  title, artist, album, track number, release date, and artwork intact.

SYNOPSIS
Better Life explores desires and fantasies, examining the ambitions and dreams that drive people to risk everything for a “better life”. The film does this through three interweaving “ghost” stories, unwinding simultaneously: scenes of contemporary Shanghai and the Shanghai Film Studios are intercut with a telling of the 15th-century Chinese fable, The Tale of Yishan Island featuring Maggie Cheung as the Goddess Mazu. Within these strands, Julien brings in a reworking of the famous 1934 Chinese silent film, Shen nu (The Goddess). With poems by contemporary Chinese poet Wang Ping, Julien has created his own cinematic meditation on China’s ancient past and present.

From now on you can buy the first ChoP album via iTunes!!

Here is the link:

After exactly one year Zen Lu and Grzegorz Bojanek joined their forces again to perform a unique live-act during the Warsaw Electronic Festival Main Event. The famous Zacheta National Gallery of Art in Warsaw became the scene for the short (only about 30 minutes) but dense improvised performance. Both Zen Lu and Grzegorz Bojanek used quite new sounds they composed during the past year and different electronic instruments to create ambient, experimental and in the end noise sound experience. This performance was the first during the Polish ChoP Tour 2010. Other concerts were organized in Kraków, Czestochowa and Sopot. 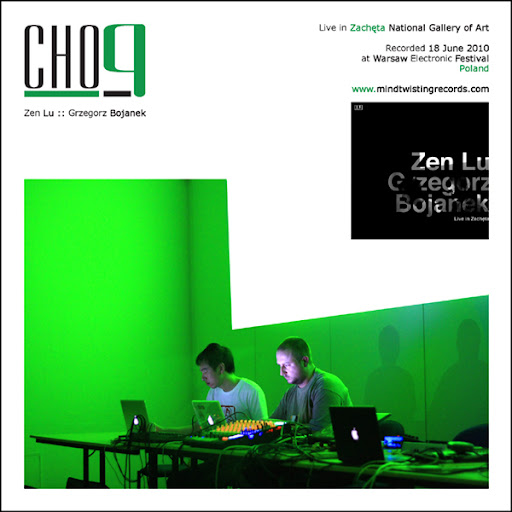 I started to working for my job after I came back to China,very tired.I began to miss those days in Poland,cool weather, beautiful city, friendly people, delicious food.....

ChoP has 4 years,we released 4 CDs,and we have  tour in China and Poland,I think CHOP project is not just music, it should have more content, it is a cultural exchange projects and platforms,I hope more members of CHOP  would come to here to  discuss and exchange culture and art.

It was realy great time for me!
Nice weather, sea, all wef crazy people!!!

I hope there will be a chance to play with Zen again...!!!
I've got a lot of ideas for some cooperations..!!!

Maos vocals was great! Set was intersting, repetitions, some gongs and bells and noise of course!!!!

Big thanks for Jarek, Zen and others!!!!

The journey from Czestochowa to Sopot was a long time on train - 10 hours, the train is very slow !!.....but everything is ok, we had a funny trip from Czestochowa to SOPOT. Jacek picked us up from the railway station at 11:00PM, It was raining in SOPOT, so it was very cold. I do not have the impression for the city on a rainy night, just want to arrive to the hotel fast.

We were hungry, and came out to look for a restaurant, but all restaurants had been closed. Because it was too late and the night was rainy we just could buy some food in KFC. I never liked KFC.

We slept comfortably after the second day already, and the weather changed for the better today. We began to visit this seaside town, it's really nice!

I played with Kim_Nasung at PLUM! FESTIVAL, no more people for the festival. I know SOPOT is also is a tourist city, so just like KRAKOW, but for us, it's ok,we have happy time on the stage. Jarek asked us if we would play again after the last perfomance, so we had a Quartet: Jarek, Kim_Nasung, Nmls, Zen Lu. It was short but very nice!